Each month Stubbs Dental donates the proceeds of all new patient exams to a deserving member or organization of our community. April's recipient is Ruth Clark. 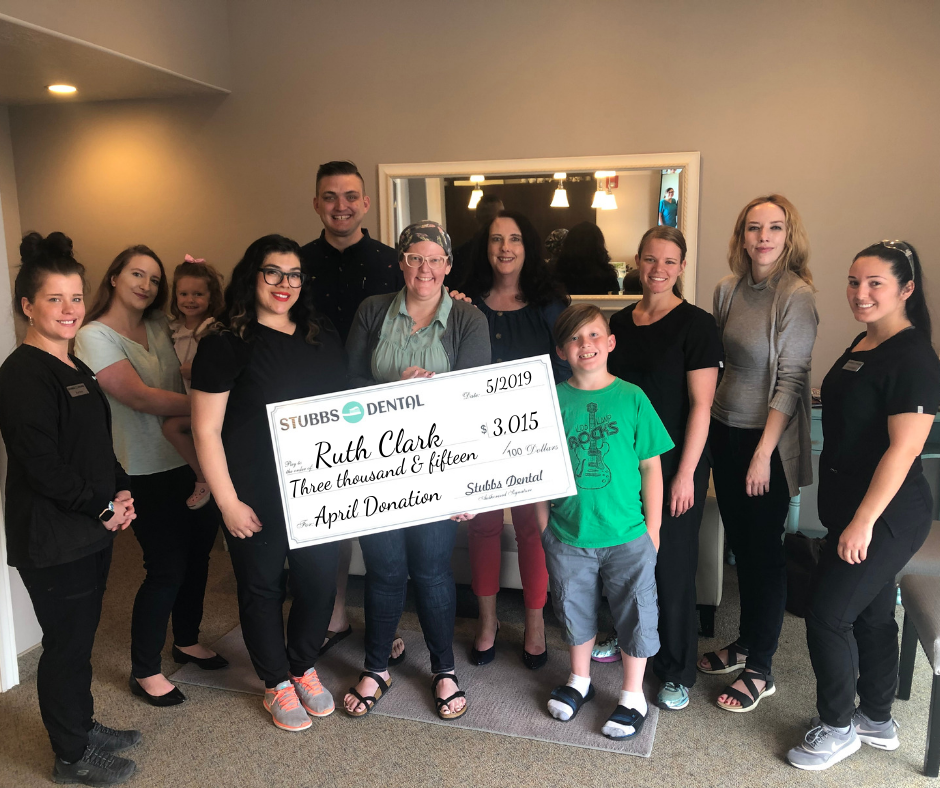 I met the love of my life Samuel Clark at the end of June 2017 via a dating app. Just one week after we matched we went on our first date. It took only three weeks to know that we wanted to be married to each other.

In September of 2017 we flew to the east coast so my parents could meet Samuel. Samuel asked my dad for his blessing that night and took me to a park near my parent’s home to propose. Easiest yes I’ve ever said in my life.

We set a date and commenced with the wedding planning. It was around that time that I started feeling not like myself.

There were chronic days that I just didn’t feel well, I was exhausted and nauseated. There were days where I couldn’t keep solid food down. Samuel and I decided to try a vegan diet to see if that helped – the nausea did not let up, however, my body did feel a little “cleaner”. November and December 2017 proved to be very challenging as I navigated a new job, planned a wedding, and attended graduate school working towards my MBA (yeah, I’m crazy). I felt like a broken record telling everyone it wasn't stress about my impending marriage to Samuel causing my health issues– that choice was the easiest decision of my life.

The day of our wedding came and I woke up that morning and dry heaved for a good fifteen minutes then proceeded to get ready. Dry heaving had become a part of my daily routine by that point. Didn’t matter what I ate, drank, or avoided – I heaved or threw up whatever was in my stomach at the time. I was also becoming increasingly concerned about the excruciating pain I felt under my ribcage and in my back. Although it was not obvious to my guests and in photos taken, I was masking incredible pain and misery throughout my wedding day.

Once off on our mini honeymoon to Las Vegas, I could no longer hide the pain from Samuel and he threatened to take me to the ER immediately. However, I resisted and wanted to wait out the pain to see if it would pass. We both spent our honeymoon with serious concerns.

When we got back from Vegas, I contacted my gastric bypass surgeon that repaired my gastro-gastric fistula back in 2016. The medical staff were alarmed to learn that I’d lost about 30lbs within one months’ time and the doctor initially suspected an ulcer and ordered an endoscope. The endoscope showed nothing wrong with my gastric pouch so the next step was a CT scan to see if my intestines were kinked or twisted. The day following the endoscope, I woke up from a nap to a new notification in the app “My Chart” saying I had new results. I opened the app and my heart immediately sank. “Multiple lesions in liver, highly suspicious of metastatic disease.” I didn’t know exactly what it all meant, but I knew enough to know it meant possibly the “C” word.

Sure enough, the medical staff called me back to let me know my doctor wanted to get a liver biopsy ASAP. The biopsy procedure went well, however, I ended up making a 4am trip to the ER due to excruciating pain in my abdomen near the site of the biopsy. A CT scan showed a hematoma, which meant nothing could be done other than take pain meds and let it dissolve on its own as I spent the weekend waiting to hear back from the radiologist with his findings.

A few days late, we got the dreaded call from my doctor. It was cancer. Stage IV. He was telling me things and using terminology that I desperately tried to write down. “Neuroendocrine tumors. It’s rare. These produce hormones which is why you’ve been sick. I have to transfer your care to an oncologist. My staff will help get you an appointment.”

When my husband of two weeks arrived, I told him what I knew. We cried. We called our moms and the family one by one. We took the rest of the day off work and disappeared to the aquarium. Somewhere we wanted to be distracted, but could also just talk or stand in silence.

What followed that day was a constant stream of phone calls to doctors and setting up appointments and being terrified and trying not to be on Google. We were told to wait two weeks to see a doctor, but my new husband wouldn’t have it and got me in to see an oncologist immediately. Our oncologist has been the best third part of our marriage, he understands us as a couple and has been one of our biggest cheerleaders in this fight. He put me on four rounds of carboplatin and etopiside which shrank the cancer to no evidence by the end of April.

Here I was bald, depleted, and determined to have the best “cancer-free” summer ever. We went on a cruise to Mexico, then I went on a girls trip to the other side of Mexico, we went on a week long trip with Samuel’s family in Yosemite during the wildfires, then a family reunion at a cabin in the mountains. We PLAYED HARD. In addition to all the traveling, we purchased our first home as a couple and we were ready to start our lives as a married couple in earnest.

By the end of summer, that old nauseous feeling returned. In matter of days, the vomiting and pain had gotten so unbearable we had to go to the ER where they did another CT scan when we received the bad news – the beast was back and threatening my lungs.

Traditional cancer treatment options were slim and I was told I had about 22 months to live. Newly married and only 35 years old, I was told I had maybe close to two years left on this earth. We desperately looked into other options. A clinical trial for Keytruda infusions at the University of Utah became available, we worked hard to pull some strings and were able to secure a place in the trial. After a few weeks of doing the Keytruda infusions, I ended up hospitalized because I got to a point where I couldn’t keep fluids down. The hospital did another CT scan, there were officially tumors in my lung and larger tumors in my liver. I was immediately off the Keytruda clinical trial and on to chemotherapy.

Currently, I get weekly treatments of Gemzar and Abraxane for three weeks with a week off between cycles. This we will do until it stops working. My diagnosis was reclassified as Aciner Cell Carcinoma (a particularly rare type of pancreatic cancer). Genetic testing shows that I have three mutations, two of which have drugs tailored to combat my particular my type of cancer.

We know our odds aren’t amazing, but we have as much hope as we can. We plan for the worst daily and pray for the best hourly if not more. My beloved husband has accepted the role of a caretaker with zero complaints. He is at appointments, helps with medications, holds me when I hurt and just cry sometimes. He pushes me to find my inner strength and hold on tightly to knowing whatever we are up against, it’s in God’s hands. I can’t even begin to express the humility and gratitude we have already felt. It has been overwhelming at times. We know we are loved and blessed and are so grateful for all that God has blessed us with. While the road ahead is uncertain, we know we can rely the goodness of the human spirit to carry us through the hard times.

Stubbs Dental was able to donate $3,015 to help Ruth with her treatments and recovery. If you are interested in donating to Ruth's fund please visit her Go Fund Me page.

So remember, when you become a patient at Stubbs Dental not only are you helping yourself by taking care of your teeth, you are helping a deserving member of your local community! If you would like to nominate someone to receive the Stubbs Dental donation please send an email to marketing@stubbsdental.com.