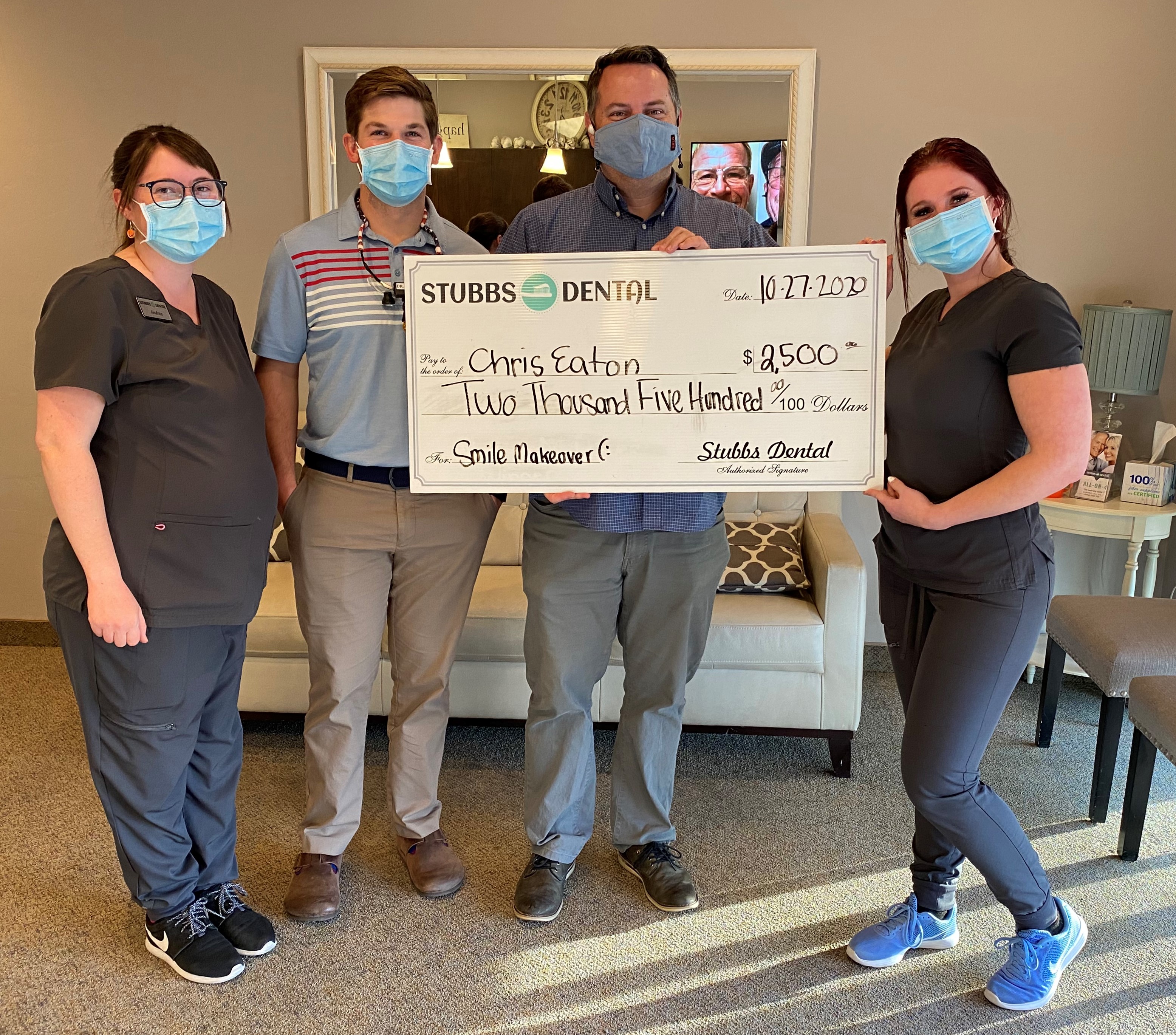 Read Chris' nomations below submitted by his wife. Chris also received many other nominations from his family and friends. While Chris' specific dental situation did not qualify him for the grand prize of the All-on-4 procedure we are so happy to award him with $2,500 of cosmetic treatment!

"When I saw that you are doing a smile makeover for a deserving Service member or Veteran, I was thrilled because I have the perfect candidate to nominate! Allow me to introduce you to my amazing husband, Christopher Eaton.

First of all, he comes from a family of 13 children (yes you read that right!) which is amazing in and of itself. All of them from the same mom and dad, no multiples, and his parents are still married for nearly 50 years now! Chris had small skinny teeth growing up. He told me that at one point, his mother took him to check into getting braces. The dentist told them that his teeth were straight, they were just small and skinny, leaving big gaps and that braces wouldn't help to fix his smile. He also has some rare teeth that they call "post teeth" on the bottom, meaning that his teeth aren't flat on the top like normal teeth, they are circular like a post. Their best guess is that it was a genetic defect that likely comes through his father's line. Our son had a panoramic x-ray done recently at a dental visit, and we learned that he is missing seven permanent teeth. The Dentist said that sometimes they will see kids who are missing two or three, but he has never seen that many before. He likely got some variation of my husband's bad genetic teeth and will need extensive orthodontic and dental work through the years and multiple implants.  Chris has told me that he was made fun of for his teeth all growing up. To this day, he nor I has ever met or known anyone with post teeth like his. To have something rare like that, that everyone "has to see" when they find out he has them, has made him very self conscious. He doesn't like to have his picture taken, but when he does he usually has his mouth mostly closed, so you can't see his teeth. Growing up in such a large family, Chris knew that his parents wouldn't be able to pay for him to go to college. He was determined to go, so he decided to join the Army right out of high school to help pay for his schooling. He went to basic training  and AIT for the military, and a couple months later left to go on a two year mission to Arizona for his church. He was serving his mission when the 9/11 attacks happened. Before he even came home from his mission, he was notified that his unit was being deployed on a year-long homeland defense mission to guard a chemical weapons disposal facility. After that deployment, he was finally able to attend college. While he was attending school, he continued to serve in the National Guard, and trained in two additional job specialties. His education 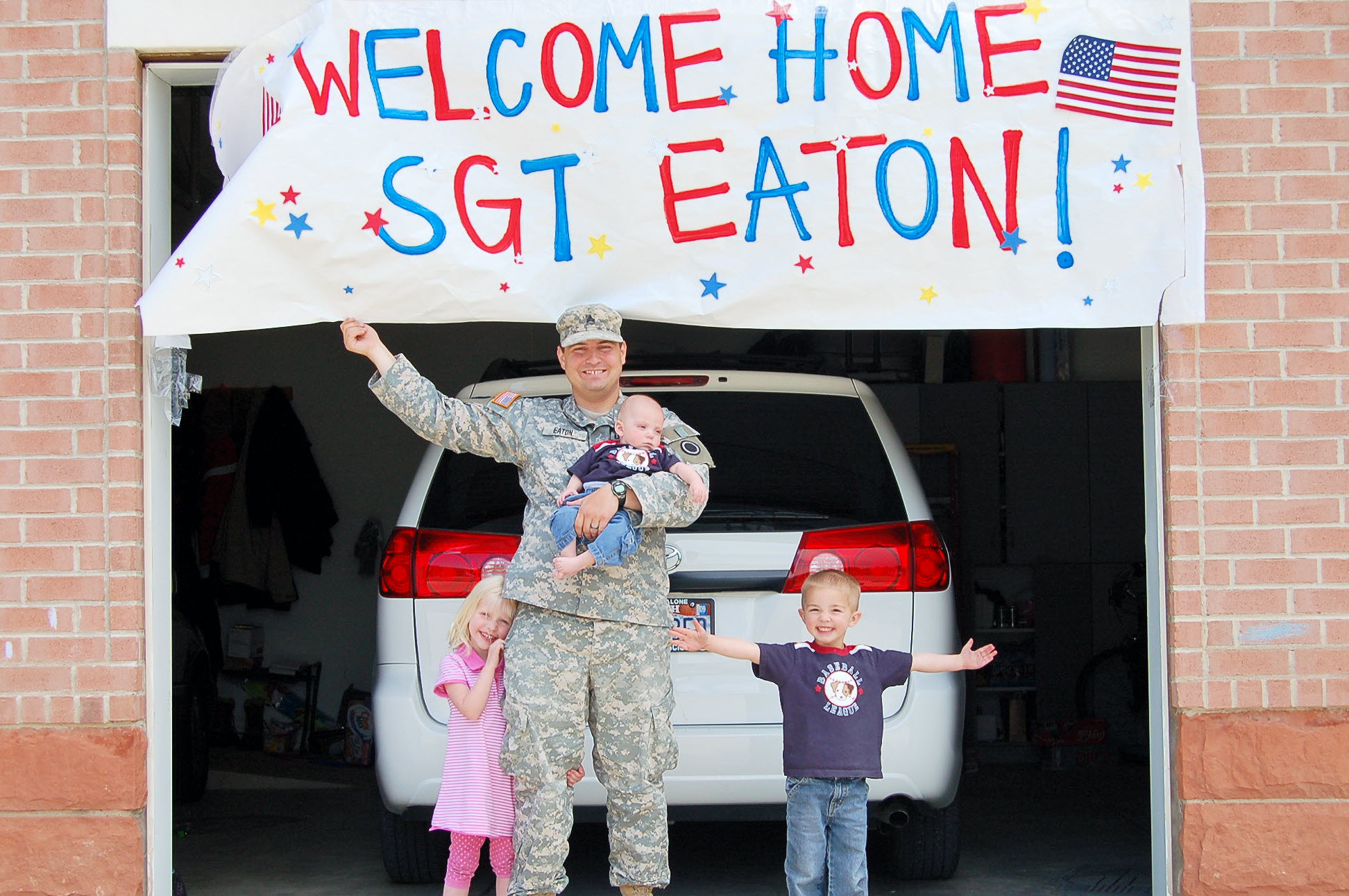 was put on hold again when an opportunity arose for him to work at the Utah National Guard Language Training Center in Ogden where he was trained in a tribal language called Balochi, which is spoken in parts of Pakistan, Iran, and Afghanistan.

Around the time Chris started this job, I was a recently divorced mother caring for a baby and a toddler. I had rented out my house and was living with my parents at the time I met Chris. I never thought I would find a man who had never been married that would be willing to take on two kids and all the excess baggage that comes from a divorce. But Chris took to my children right away, and they bonded to him quickly too. Being the fifth child of thirteen, he had plenty of experience changing diapers, and taking care of young kids. This dating period showed me what a selfless person Chris is. He had no obligation to me, but demanded to help pay my bills, buy my kids things they needed, etc so that i didn't have to work as much, and could spend more time with my children. About ten months after dating, Chris and I were married. About a month later, the renters in my previous home had moved and we were painting and preparing to move in when we got the shock of a lifetime. We found out within days of each other that Chris was going to be deployed to Iraq for a whole year, and that I was pregnant with our first child together. We had to scramble quickly to find new renters for my home, as we decided that it would be best for me to stay with my parents during his deployment.  Needless to say, this was devastating to me, but Chris knew it was his duty to serve his country with his unit. His unit left in May of 2007. They trained for three months in Texas before they left for Iraq. Being deployed to a War zone the first year of our marriage was difficult to say the least. I was very sick the whole pregnancy with different complications, and our baby was born 7 weeks early. Having a baby in the NICU, while having two young kids at home to take care of was very exhausting and challenging. Being the dedicated husband and father that Chris is, he would stand in line daily (sometimes for hours) after working a 12 hour shift so that he could call me to check in on us and let us know that he was safe. He has always made our family his first priority, no matter what sacrifices he has to make, to ensure we are taken care of. 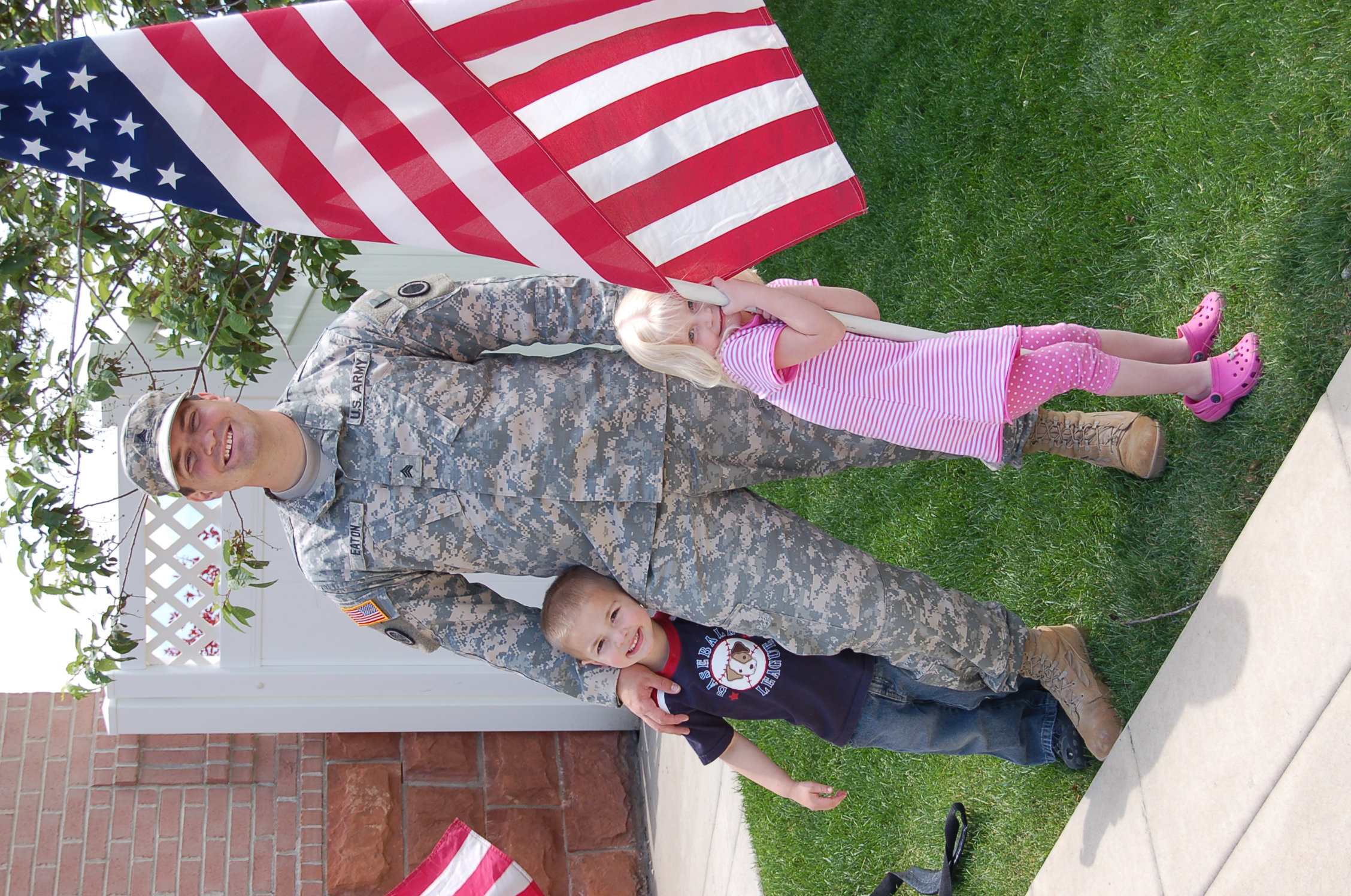 Chris returned from Iraq when our son was around 5 months old. Shortly after he came home, he had a dental exam at the VA hospital. The Dentist there was so excited when he saw Chris' rare "post teeth", that he called all the other dentists and assistants over to see what they learn about in text books in dental school, but rarely get to see in practice. This was very embarrassing for Chris, but being the good natured person he is, he didn't make a big deal of it at the time. However, this experience kept him from feeling comfortable going to the dentist for over 5 years. Luckily, he brushes regularly and doesn't need to floss much due to the large gaps between his teeth, and he only had a few cavities when he finally came to see Dr. Stubbs. Chris has wanted to get his teeth fixed for a long time, and has even had treatment plans and estimates written up multiple times. Whenever we consider the costs of having his teeth fixed, Chris always concludes that they money is better spent on providing opportunities for our kids and taking care of repairs. He will never spend money on himself, because there are always medical bills, car repairs, etc that come up. He will never go into debt for something that he thinks would be a selfish use of our money.

I feel like Chris is very deserving of this opportunity as a reward for his selfless service to his country, church, and family. Chris is always helping others, and now it's our turn to help him. He spends all his free time serving our neighbors, calling his family members to check on them, helping around the house, and spending time with his four children. He rarely treats himself to anything nice, and I would love nothing more than to surprise him with something he has always wanted. I know that winning would change his life for good. It would make our whole family so happy to see the boost in his self confidence that would come with teeth that he no longer would have to be embarrassed about. He would be able to go out in public and talk to new people, without fear of being judged. He has felt that he has been turned down certain jobs because of his bad looking teeth, and having a new smile would give him the confidence to interview again to look for a better paying job. I know that Chris would be so grateful to have this opportunity to better his smile. I know that he would be more willing to be in family photos with us, and that his increased confidence would allow him to be more social. This would be a dream come true for him, and a big burden lifted off of his shoulders that he has been carrying around with him his whole life.

I am so thankful for the kind and caring service that we have received with Stubbs Dental. We have been impressed with the caring dental staff, and your support in our community. I could go on and on about my incredible husband, and all the things he has done to serve our country, his church, the community, and his family. I hope that you can feel of my love for him, and my desire to lift this burden for him and give him the gift of self confidence that he is so deserving of. Everyone who meets Chris, loves him. He is kind, gentle, and compassionate towards everyone. I don't think he has a single enemy. You will not go wrong by picking Chris as a recipient for the smile makeover. Thank you for your time and consideration!"