We at Stubbs Dental know 2020 was a very hard year for many people and we’re glad it's over too! But it wasn’t all doom and gloom, as we were able to help support some truly amazing people through some very hard times. Today we’re going to recap all of our amazing donation recipients and relive some of our proudest moments of 2020! 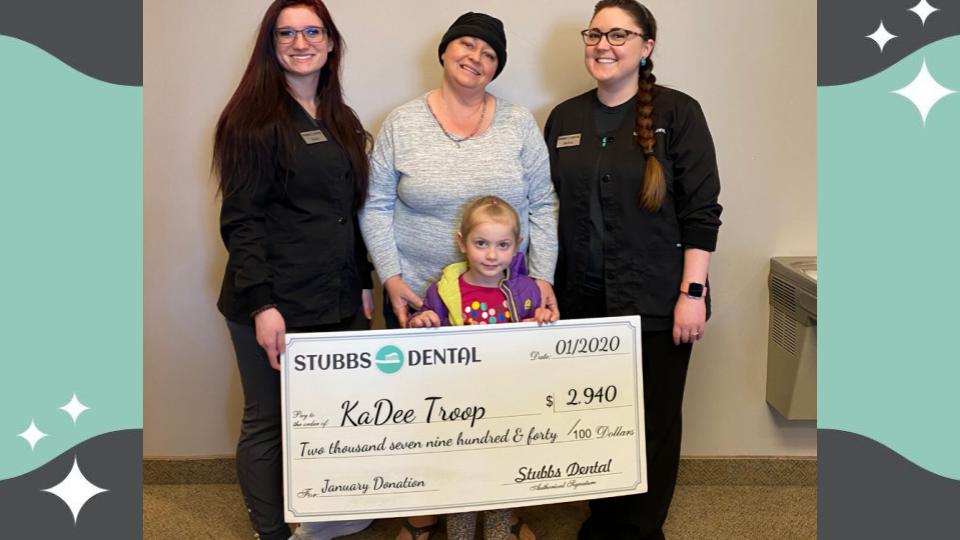 Kadee is a mother of 7 and supports her 4 children diagnosed with Epidermolysis Bullosa, a rare and painful skin condition. When she’s not helping her own children, she is an activist helping other EB families across the country. After being diagnosed with stage 4 cancer, she could no longer work her second job and has been struggling to make her childrens constant medical bills. We hope this donation was able to make a difference in her and her family's life. 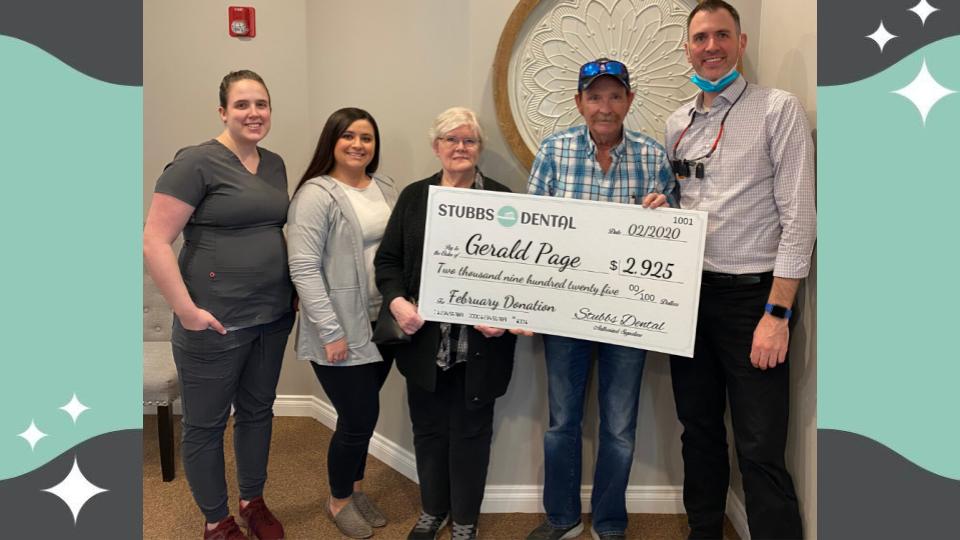 After suffering a heart attack after a long day of work, Gerald needed his heart shocked 4 times, and to be placed into a medical coma for 5 days. During this time, he received a bypass surgery and had a pacemaker implanted in his heart. Though this was quite the scare for him and his family, his heart is now in good condition. 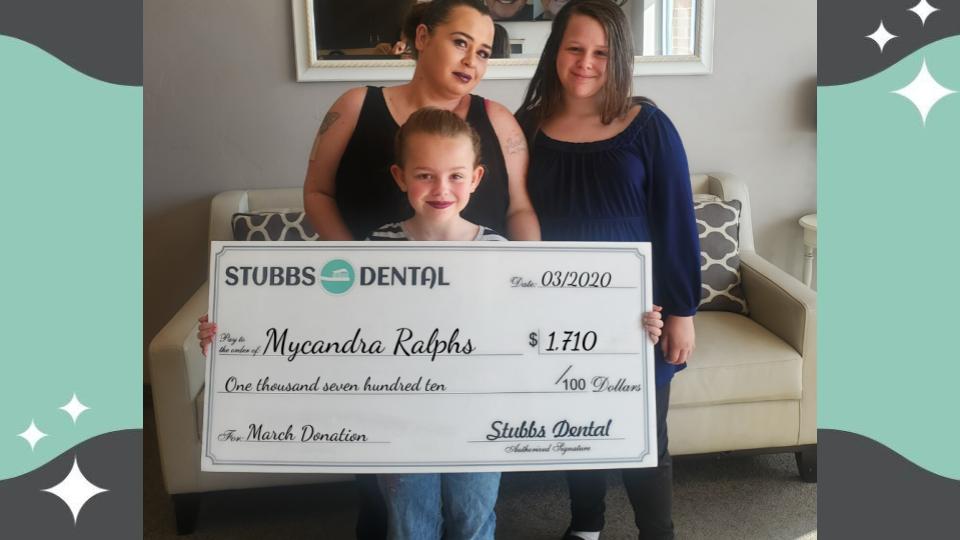 Born with a rare disease, Mycandra was not supposed to live past 6 months. However, after 10 surgeries in her first year of life, this little warrior was not ready to give up. To make matters worse, her mother suffers from lung cancer and needs a large portion of her right lung removed. We pray this money helped Mycandra and her mother find the medical treatment they need to live a normal, healthy, and happy life. 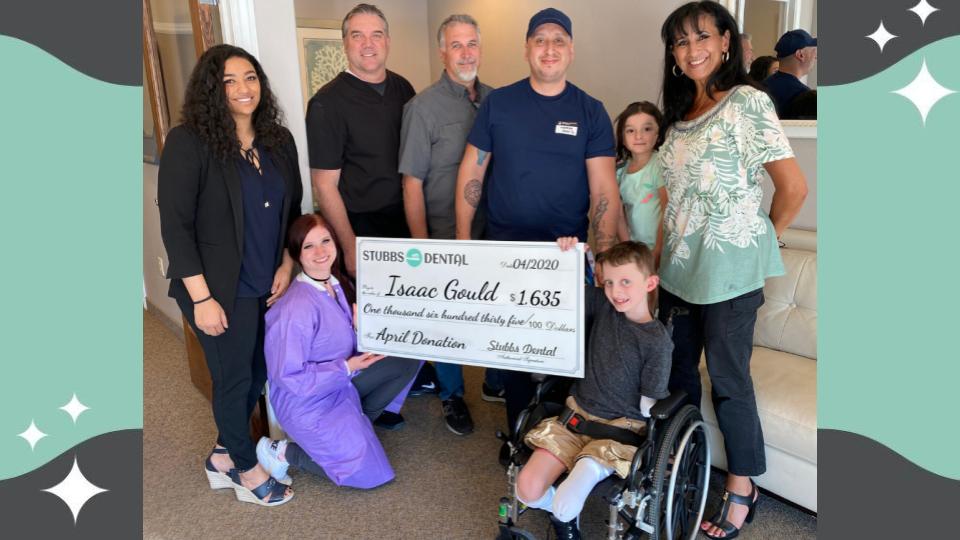 After contracting Influenza A and Strep, Isaac needed his arm and leg amputated to stop the infection from spreading. Having already lost his mother 3 years ago, Isaac has had a tough time. His father has been at his side comforting him so he has been unable to work. We hope Isaac can overcome his challenges and are glad we could help this amazing and brave family. 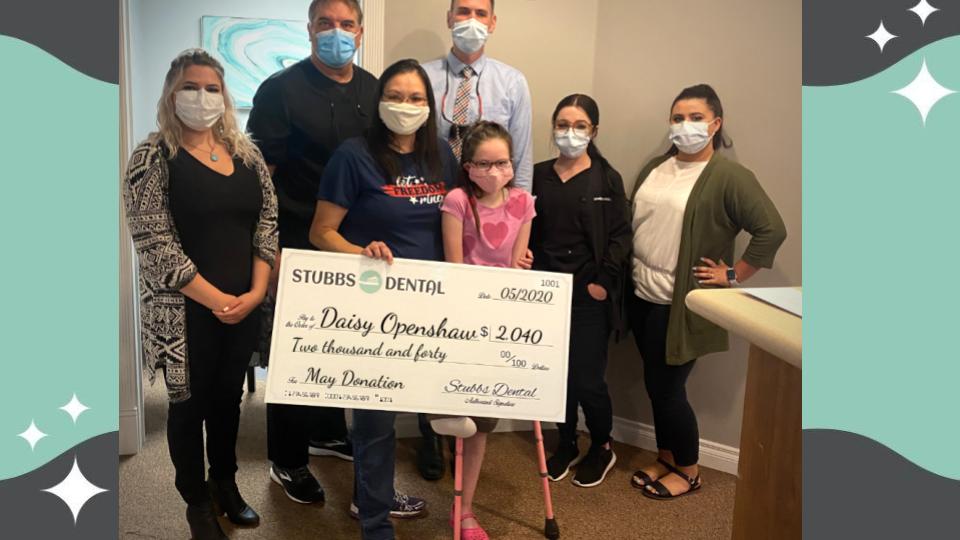 12 year old Daisy was born with  Fibular Hemimelia. Fibular hemimelia is a birth defect where part or all of the fibula bone is missing, leading to deformities. She had her first amputation at 8 months and began wearing her first prosthetic at 10 months old. She has gone through 17 prosthetics as she has grown and a dozen revision surgeries on her amputation. We know this little girl has the heart to make it through anything and we hope our donation was able to help. 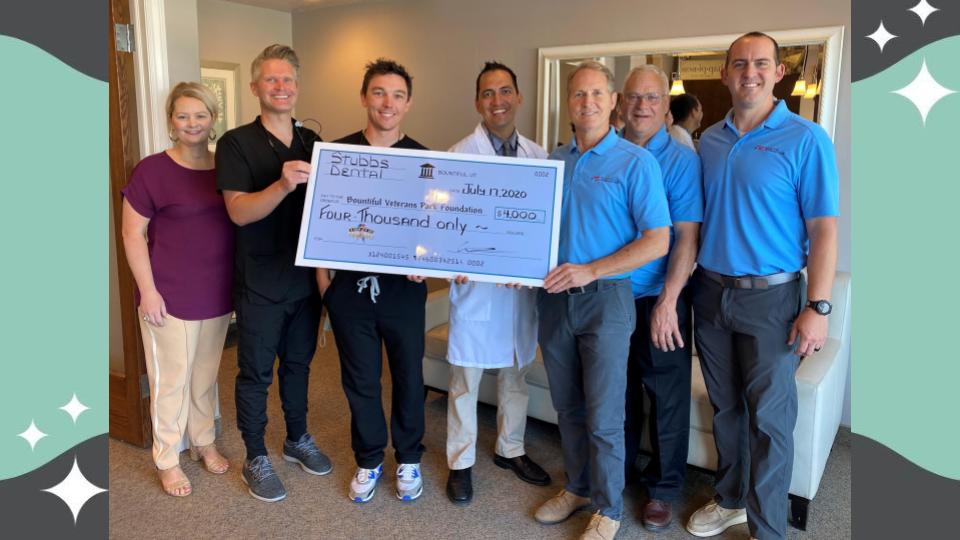 The Bountiful Veterans Park is a private initiative that will recognize and honor all Bountiful, West Bountiful, Woods Cross, North Salt Lake and Centerville veterans.  The design and construction of the Park will be mostly funded by private donations.  The City of Bountiful will provide the land for the park as well as the future maintenance of the park. 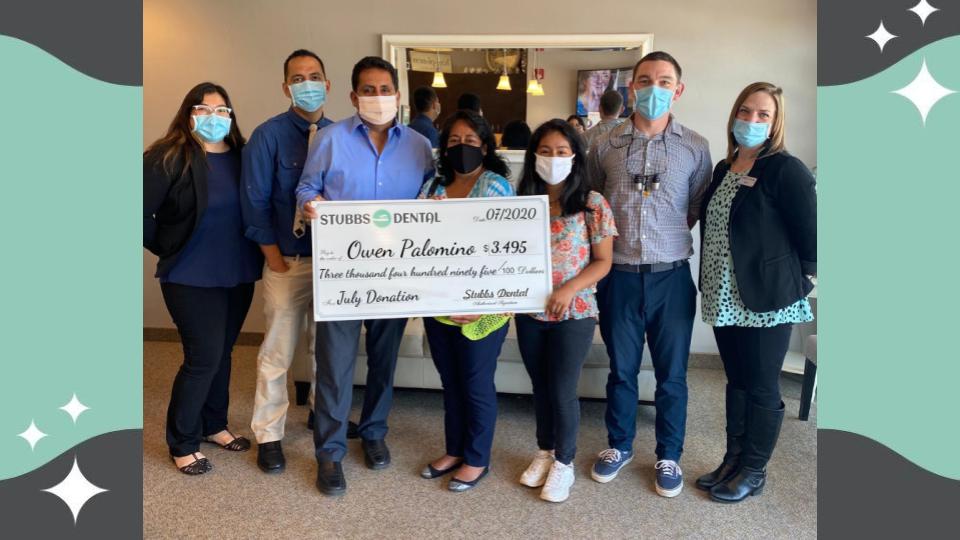 Owen had been working tirelessly to afford to provide for his wife and 3 children, and in the hopes he could one day bring them over. While working on roofing a large house Owen fell 45 feet and suffered head trauma that may leave him in a 24 hour care facility for the rest of his life. We hope for the best for Owen and his family, and pray that his recovery goes quickly. 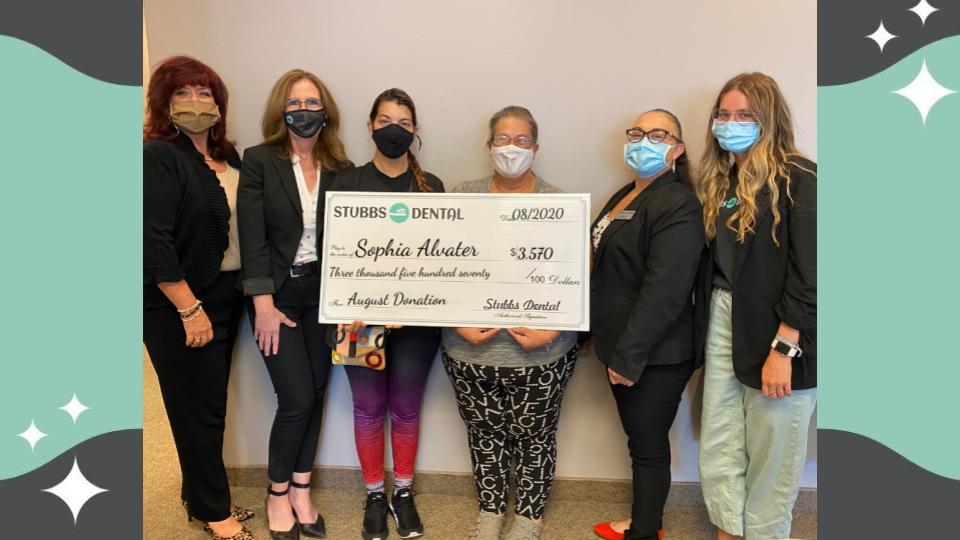 One day Sophia woke up to a stabbing pain in her side and a sickly feeling. After checking into the ER later that evening doctors found her appendix was enlarged and she needed emergency surgery. During the surgery, doctors found a tumor growing on Sophia’s appendix and colon. Just 28 years old and born with a chromosomal abnormality, she is a fighter and and a strong soul. We pray for this amazing woman’s full recovery. 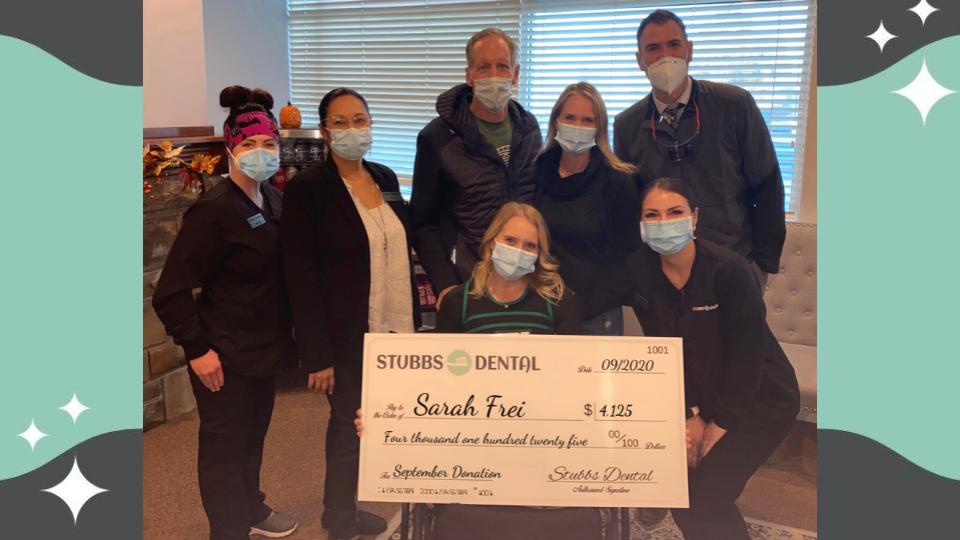 Sarah and three of her friends were driving back from Bear Lake and were involved in a head-on collision with a drunk driver. All were wearing seat belts. All suffered different injuries. Sarah had to be life-flighted to Primary Children’s Hospital where she lost 30% of her intestines, was confirmed paralyzed from the waist down, and had to have both legs amputated at mid thigh. On October 13th, after 75 days in the hospital, 20 surgeries and over 70 hours of therapy, Sarah was able to come home. Sarah has an incredibly difficult road ahead but we know she has the heart and the grit to turn this tragedy into something beautiful and inspiring. 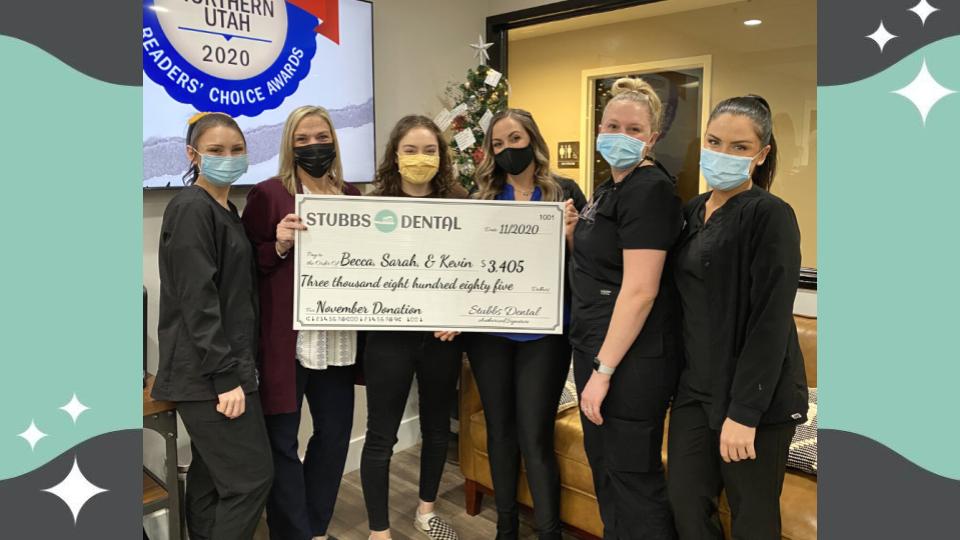 Becca is 18 yrs old, a preschool teacher and the acting guardian of Sarah (16 yr old) and her brother Kevin (14 yr old), as Sarah and Kevin's parents have both been drug addicts for years. Their parents are also both in rehab.We wanted to make sure that we could help Becca cover everything she needed in the present and help her in the future to continue to provide for Sarah and Kevin. All thanks to our amazing new patients, Stubbs Dental is proud to donate $3,405 to help Becca provide for both Sarah and Kevin! 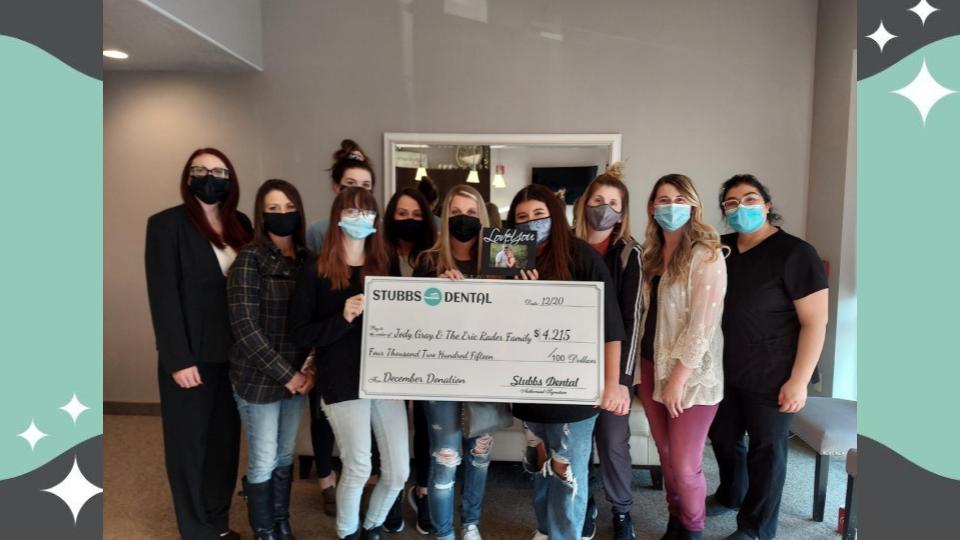 Eric Rader and Jody Gray have fallen upon hard times. Eric was recently diagnosed with stage 4 colon cancer in June of 2020, and has been out of work on chemotherapy ever since. Already dealing with the loss of their income and steep medical bills, December came and both the Raiders contracted COVID as well as pneumonia. Just a few short weeks after that, Eric suffered a stroke that ended his life on January 7th, 2021. The whole family is grieving the loss of this father of 12, and grandfather of 13. 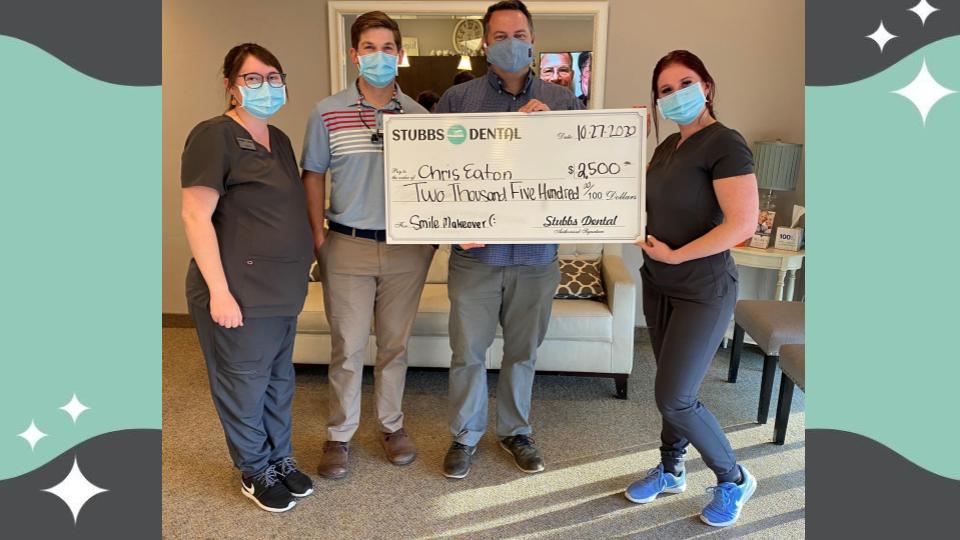 Chris was born with his father’s bad teeth and was missing 7 teeth throughout his mouth. Chris was a selfless man, to his country, to his wife and children, and to his Church. We appreciate this chance to give back to a man who has done nothing but serve the people around him and hope this new smile lifts the burden he has been carrying for so long! 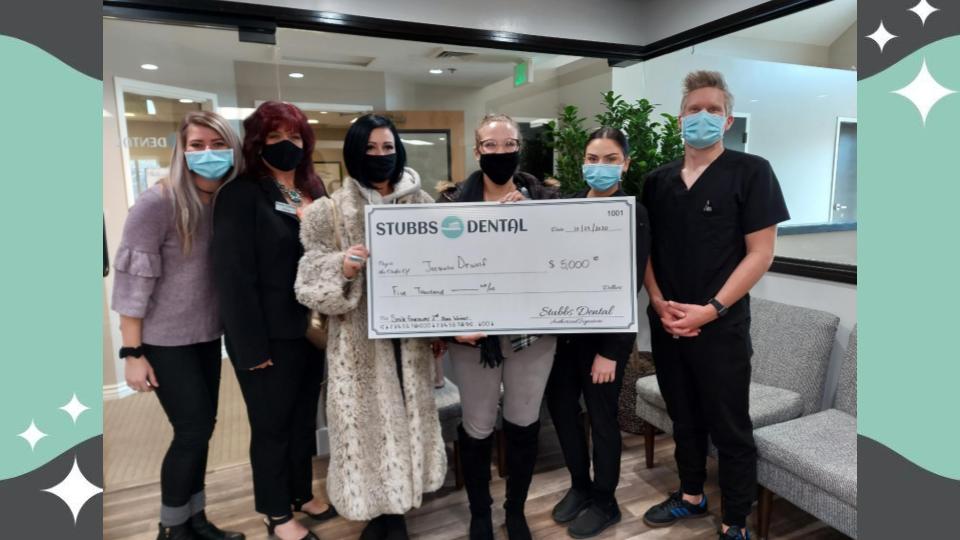 She was honorably discharged from the Navy for PTSD due to getting assaulted in the service. During the assault, one of her teeth was knocked out. I think this is what started the downward spiral in her esteem. She struggled with addiction, PTSD, and a number of other emotional issues due to this event. She is now living a life of recovery, (clean and sober), AND spends most of her spare time volunteering for an organization called “Addicts to Advocates”. She does laundry, and provides meals for our downtown homeless drug addicts, turning the shame of her past into PRIDE. We hope these new teeth help her transition into her bright future. 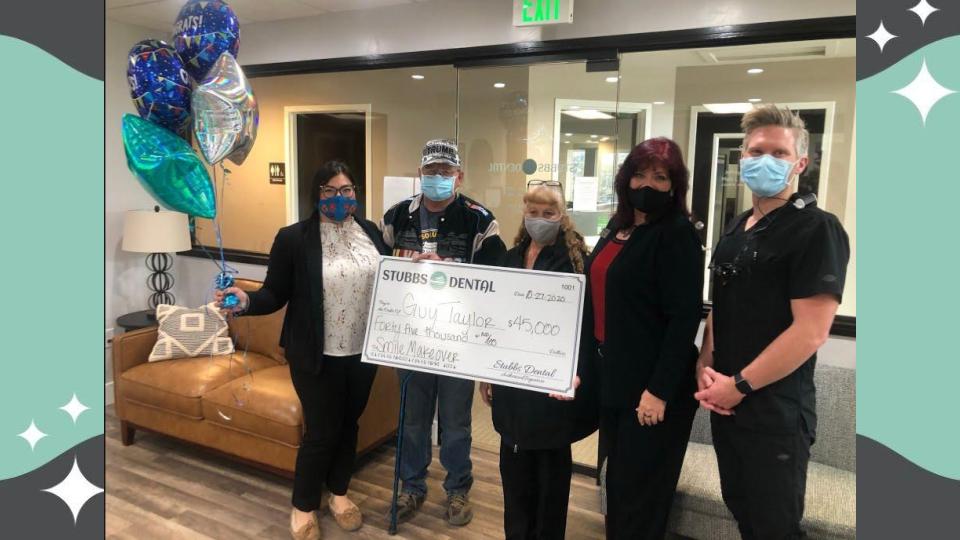 When Guy was seven years old all of his family, except his dad, was in a vehicle that was being driven by his mother, they were struck head on by a vehicle driven by a drunk driver. His mother and baby sister died from their injuries. He ended up with a broken nose and his upper teeth were damaged. Despite this, Guy has managed to be a happy, hard working, and generous man through and through. We’re glad we could help this amazing man get his smile back. 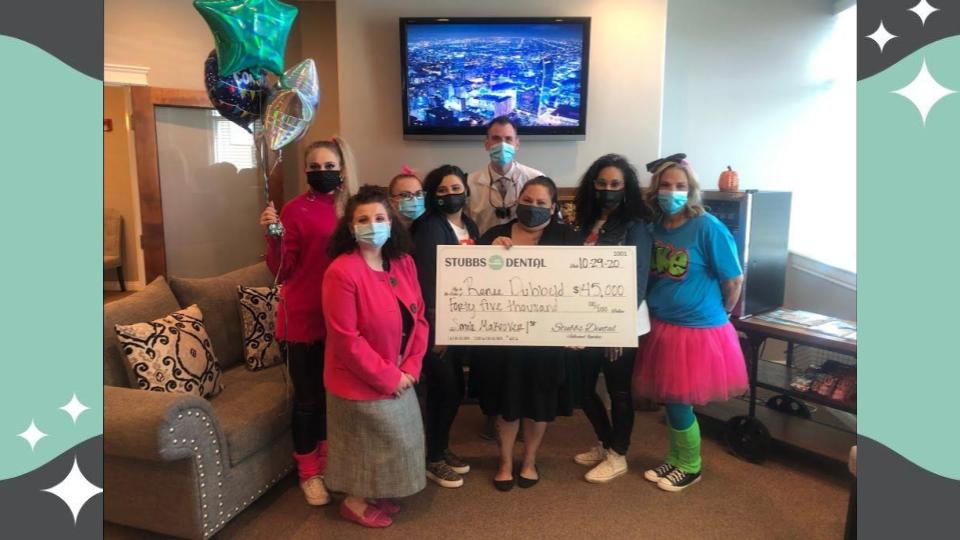 Renee received her Basic EMT certification in March of 2010 and began working as a Med-Tech for a residential treatment center with troubled youth. She had a rough childhood and experienced a lot of things a child should never experience. After getting a job at 911 dispatch she received a call that her close friend and coworker had died. This took a toll on her mentally, but she is coming back from it and ready to start helping people again. We’re glad we could give her a smile to match her amazing soul.

Remember, when you become a patient at Stubbs Dental not only are you helping yourself by taking care of your teeth, you are helping a deserving organization of your local community! If you would like to nominate someone to receive the Stubbs Dental donation please send an email to marketing@stubbsdental.com.